The four major DEP components are the soil erosion model (WEPP); the soil, topography, and land management input database; daily weather information; and a sampling and scaling approach for the daily modeling and reporting, respectively, of hillslope soil erosion and water runoff in Iowa. Substantial revisions from the first version (Cruse et al. 2006) include complex (versus uniform) hillslope modeling, annually updated remotely sensed soil management and land use databases (rather than NRI-supplied information), and hydrological (rather than geopolitical) discretization of the state for analysis and reporting. Outputs reported for each HUC 12 include average daily precipitation, average soil detachment per hillslope and average delivery of detached sediment to the base of the modeled hillslope.

Water Erosion Prediction Project. The Water Erosion Prediction Project (WEPP) hillslope model (Flanagan and Nearing 1995) was selected for the DEP. WEPP simulates rill and interrill erosion by rainfall and runoff and spatiotemporal distributions of soil detachment and sediment delivery (Flanagan and Nearing 1995). The basic element on which WEPP is implemented is a hillslope, which consists of one or more overland flow elements (OFEs). An OFE is a hillslope segment that represents a unique combination of slope, soil type, and land use.

Studies have validated the accuracy and unbiasedness of WEPP erosion estimates and confirmed its applicability in a broad range of conditions (Tiwari et al. 2000; Laflen et al. 2004). Motivations to select WEPP for this project include its capability to run continuous daily simulations and for modeling runoff and erosion on complex hillslopes. The DEP executes WEPP as a continuous simulation model to generate daily estimates of runoff, soil erosion, and soil moisture across Iowa. The WEPP model simulation is supplied daily meteorological data, and the field specific crop and soil management parameters needed to run the model are assembled in an annually updated database.

Input database. In addition to weather, the required WEPP inputs are topography, soils, and agricultural land management. In the original implementation of this project, slope, soil, and cropping and conservation practice information were obtained from the NRI (Cruse et al. 2006). While the NRI sampling points are based on actual locations (Nusser and Goebel 1997), the precise locations cannot be disclosed due to privacy concerns and potential operator bias (Cruse et al. 2006). Thus, in an effort to realistically assess soil erosion on a spatially explicit and daily time scale, a new database of WEPP inputs has been developed. The three primary biophysical conditions that are inventoried for the DEP are topography, soils, and management.

Assumed uniform slopes were the only topographic product available in the first iteration of this project (Cruse et al. 2006). However, actual hillslopes are typically complex. In terms of erosion modeling, complex slopes can result in greatly different output relative to uniform slopes because complex hillslopes often experience varying levels of erosion and/or deposition at different points along the slope. For the DEP, high-resolution topographic data are used to construct discrete hillslopes for modeling erosion. Light Detection and Ranging (LiDAR) data, available from the Iowa Department of Natural Resources, were processed with custom algorithms to generate a 3 m (9.8 ft) digital elevation model (DEM) of each HUC12 (USDA-NRCS, USGS, USEPA, 2012) watershed in Iowa. Details of the hydrologic enforcement process can be found in Gelder (2015). Processing settings maintain all depressions deeper than 9 cm (0.5xRMSE) or larger than 100 square meters.

The final component of the WEPP input database is management, which is separated into crop rotation (or sequences) and tillage practice for each agricultural field in the state greater than 6 ha. Crop rotations are determined for each field using the USDA-National Agricultural Statistics Service (NASS) Cropland Data Layer (USDA, 2014). A six-year rotation is derived from each field’s most recent crop history and is used to preprocess the WEPP model to condition crop growth and antecedent soil moisture conditions at model initiation. The land use for the model (current) year within each field is based on the field’s six year rotation, extending that rotation one additional year considering the preceding year’s crop. Land use data are updated annually (Tomer, 2015). Tillage practices are estimated for each field using Landsat 8 imagery. From the normalized difference tillage index (NDTI) the amount of residue cover on the soil surface is empirically derived (Gelder et al., 2009), which is then correlated to one of four tillage intensity classes which correspond to typical conventional tillage, intensive mulch tillage, reduced mulch tillage, and no-tillage practices.

After determination of crop rotation and tillage practice for each agricultural land parcel, these parcels are rasterized along with the elevation and soils data. This geo-referenced ensemble of topographic, soil, and land management information is used to extract data to populate WEPP OFE and hillslope input files.

DEP assimilates meteorological data each day into a format usable by the WEPP model.  While WEPP can use a weather generator to create virtual storms, we instead provide spatially and temporally explicit weather information to drive our daily estimates.  The generation of this information is facilitated by various data services and archives maintained by the Iowa Environmental Mesonet (IEM).  Here is how we generate this information.

Each modeled hillslope is assigned to an individual 0.01 by 0.01 degree latitude / longitude grid cell based on the starting point of the hillslope. This grid cell defines a "single climate" file of which one or more hillslopes may share.  These files provide daily values of:

While we can reliably provide precipitation at a scale of 0.01 degrees, other meteorological variables likely do not vary enough to significantly impact erosion estimates at that scale.  So for non-precipitation data, a coarser grid (0.125 by 0.125 degrees) is used provided by the IEM Reanalysis Product (IEMRE).  This IEMRE product is based on the combination of real-time model analyses and surface observation gridding to provide a complete dataset without missing values that WEPP is unable to handle.

The "break-point" precipitation dataset is clearly the most important to drive erosion and warrants further discussion here.  The term "break-point" defines the combination of precipitation accumulation with time.  The WEPP climate file contains a series of time stamps and accumulated precipitation for that day.  There are WEPP software defined limits to how many precipitation break-points can exist for one day, so processing code will collapse down periods of inconsequential precipitation intensities.  For example, imagine drizzle (< 2.5 mm/hr) happening over an hour.  Instead of providing break-point accumulations of 0.08 mm every two minutes, a simple hourly total is provided.  Any two minute intensity over 0.08mm is retained in the file.

The present day precipitation dataset is heavily dependent on the National Weather Service Multi-RADAR Multi-Sensor (MRMS) product.  This product does not date back to the start year (2007) of DEP, so a slightly different approach is taken for dates prior to 2015.  For the entire time domain, additional quality control of the MRMS product is provided by the NCEP Stage IV and Oregon State PRISM products.  These two later products are at a coarser time and space resolution.  They effectively provide bias corrections to the total precipitation generated by MRMS.

For dates prior to 2015, Stage IV (~ 4km) data is linearly downscaled to the 0.01 degree grid.  NEXRAD mosaic base reflectivity data at 2 minute resolution is used to spread the hourly Stage IV data in time.  A logarithmical equation is used to generate the highest precipitation intensities with the strongest reflectivity returns.  Since the PRISM data availability is too late to be used for real-time needs, the information is used to bias correct the stage IV data a few days later with subsequent reprocessing of the DEP results to follow.  We have generally found this correction to not impact intensities much and thus erosion estimates, but help to get the total rain volume right.

For 2015 and later data, the MRMS 2 minute intensity product is available on the 0.01 grid used by DEP.  The real time information is heavily impacted by RADAR data and includes little station data gauge bias corrections.  MRMS produces additional products with a slight delay that contains these corrections.  When the daily processing runs, the bias corrected data is first consulted before using the more raw information.  As with the pre-2015 data, stage IV and PRISM again helps to bias correct this information.  A careful reader may wonder how time is handled in this case as stage IV is hourly and PRISM is 24 hourly at approximately 7 AM local time.  The answer is the bias corrections are applied at an hourly time scale appropriate for the product being used and the DEP processing handles the inclusion of this data at a calendar day time scale.

We then use the Stage IV data, which is a coarser resolution: 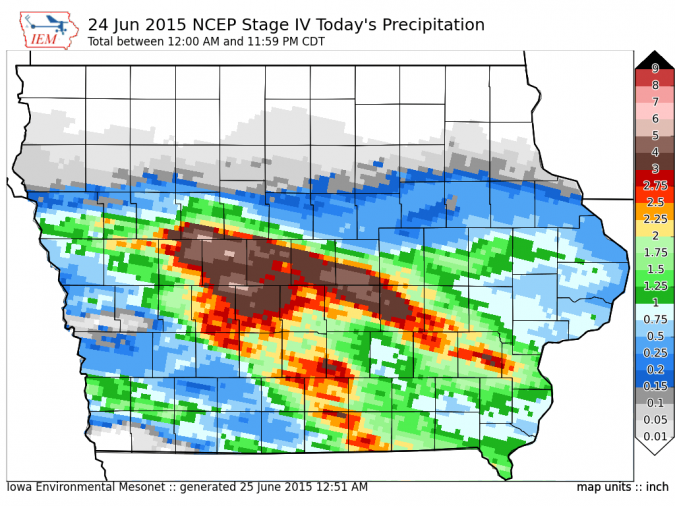 To bias correct the MRMS data to produce the following 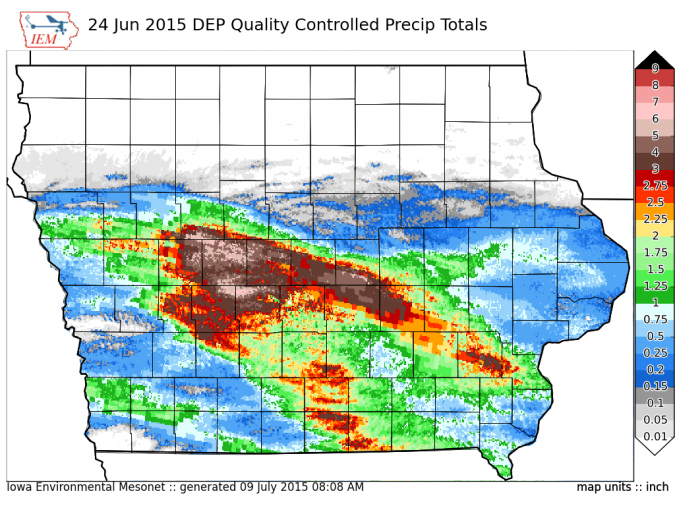 Since our DEP results are produced on a HUC12 datum, this 0.01 grid information is processed through a GIS operation (zonal stats) to provide a spatial average over each HUC12 geography. 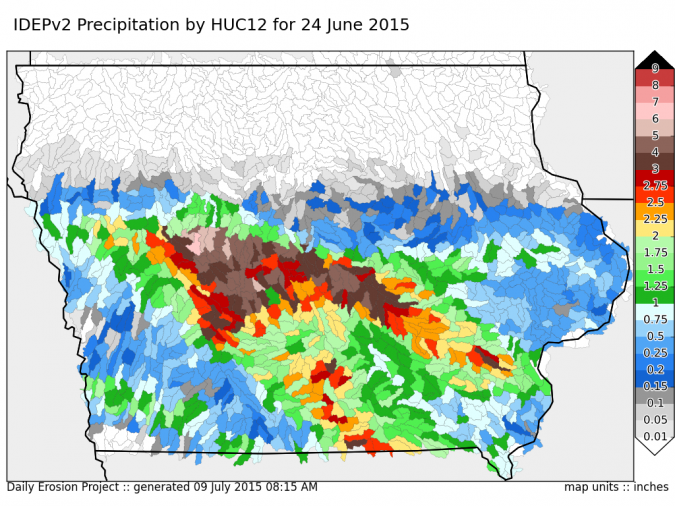 And that is a general overview of how the sausage gets made here for the precipitation data.